Tails from the past: Orao

This post is about perl emulator of 6502-based machine called Orao. 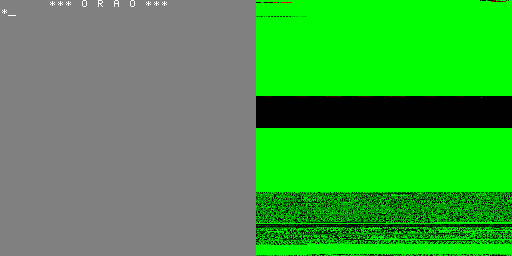 It was my first computer (I attended BASIC introduction course several times so I can work on machine). I never owned one (and almost nobody did back that), since most of machines where installed in schools (like the one near to my place offering basic computer literacy courses).

When I found out that Josip Perušanec wrote Orao Emulator, I was very excited. After all, who can resist temptation of running his old BASIC programs? But, since his version runs only on Windows (to be fair, it runs also under wine), I had to write my own. Credits where credits are due: without Josip's emulator (and especially ROM images) you wouldn't be looking in screenshot above.

I wanted to write it in perl, so at first I used Acme::6502 to do processor emulation and wrote screen interface in SDL. However, that seems slowish, so in the end, I wrote perl bindings for great 6502 emulator M6502 and implemented Orao emulation as embedded perl interpreter inside CPU emulator. I used Extending and Embedding Perl from Tim Jenness and Simon Cozens as my guide, and I can really recommend this book if you want to learn perl-C interaction. If I didn't already owned pdf copy, I would surely buy both pdf and paper copy. It's so good.

Both versions can startup Orao, but pure perl version probably won't receive much love and care. As you can see on screenshot, on the left is display (Orao didn't have text mode, this is graphic display) and on the right is graphic representation of memory map. It doesn't support keyboard at this moment, but it's just a few commits away :-)

Update: Changed link to source code. It's part of the bigger VRač project, but that will have to wait another post...