How is closed source product different from free software?

Let me first explain background to the story: you want a system to implement distributed printing. It has local accounts (it can fetch users from LDAP) and does routing of printed documents to printers which have card readers so that users can pick up printouts after they identify with a card.

Sounds complicated? O.K., let's consider that we have a system and we are trying to deploy it. At this point it doesn't metter did you already paid for it or if it's open or close source. Really. 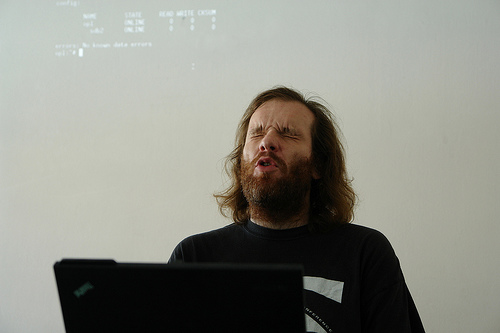 You are trying to configure it. It's Java (because it's enterprise system) and it seems that most of things are configured using .ini files. After four weeks of trying to make it work, you have following facts:

First, let me emphasize that this problem might be same for both types of software. Every software is reliable only in environment in which it's tested, and I know they very well from my experience with Open Source. However...

If system is closed product without source

You can exchange several e-mail with help-desk which is really first level customer support who is more or less working using cookbook. I have seen such help-desks at both previous jobs, so I don't really expect deep technical expertise about application. However, that resulted in painful try-and-error process because configuration options are somewhat cryptic and sparsely documented.

If system has source available

If I could look into source of application I could fix configuration option names. Or improve documentation. Probably even fix problems that I found and submit patch to improve upstream project (or pick another one because this one just isn't worth it).

So the real moral of this story is: closed source projects limits your flexibility. It will drain your time and bring you half-working solution without ability to fix it yourself. I really honestly cannot understand why someone would like to choose that.

I also have another example of company within same industry (printing) with closed hardware which at least got driver part right: Dualys has source code for CUPS driver. I still haven't found time to try it out, but I was afraid that making custom card printer will be more work than syncing closed source commercial application with LDAP, right?

Freedom as right of the user

Isn't it funny that Richard Stallman's Crusade for Free Software started with a printer?