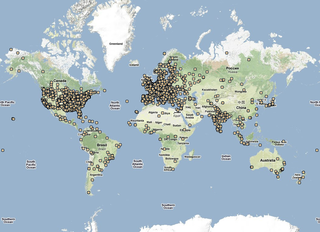 Browsing through subscribed videos this week on YouTube I stumbled upon video Simulating Markers with Tile Layers which described how to create custom tiles for Google maps using perl and PostgreSQL. John Coryat did great job at describing challenges, but also provided useful source code snippets and documentation how to create custom tiles. So, this weekend I decided to try it out using publisher field (260$a) from our Koha to show where are our books coming from?

I had several challenges to overcome, including migrating data from MySQL Koha database to PostgreSQL (so I can use great point data-type), geolocating publisher location using Yahoo's PlaceFinder (I tried to use Google's v3 geolocation API, but it had limit at 10 requests which wasn't really useful). I also added support for different icons (with arbitrary size) depending on the zoom level. In the process I also replaced cgi based tile server with mod_rewrite configuration which does same function but inside Apache itself.

Source code is available at github.com/dpavlin/google-map-tiles and it's really easy to overlay huge amount of data-points over Google maps using custom tiles, so try it out!