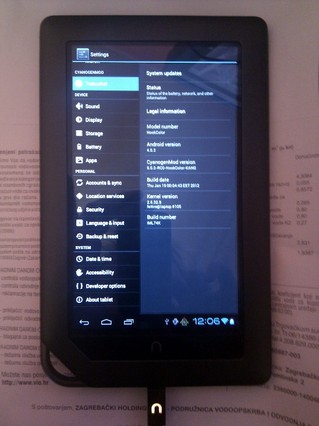 For a last month or so I used Barnes & Noble Nook Color as Android tablet. This post will try to explain what is wrong with Android tablets and now to fix this.

For a start, original Android distribution on Nook doesn't make it really Android tablet (no market). But there is easy solution since this device is supported by CynanogenMod 7 for Nook Color to get proper Android distribution. So, let's get started with hints for easier life with your new tablet...

For a start, you won't see Nook in adb devices listing. This is easily fixed with proper device id in ~/.android/adb_usb.ini like this:

There are lot of application which will look quite broken on your Nook when running Android 2.3. Some of them require audio input, GPS or camera and they generally won't work. There is also problem with application which just don't know about wired 1024*600 screen size and produce strange small screen centered on big display.

However, this is just a list of few extremely useful apps which you should install on Nook with CM7:

Once you install all of this, you will be painfully aware that Android 2.3 just isn't OS which works well on tables. So, let's try to see what Google has in source for tablets...

To get most out of Android on tablet, you have to hop over to CM9/ICS Nightly Builds and install unstable builds on ICS on Nook Color. After initial install reboot into recovery, flash Google Applications from gapps-ics-4.0.3-sam-noinit.zip, turn off signature verification and install fix-bootanimation.zip and telephony-permission-fix.zip. Unfortunately browser application doesn't work for me well, and usually segfaults with:

ICS on Nook currently doesn't have hardware acceleration (but older Androids also doesn't have it) and it freezes from time to time (so you will get quite used to holding power button for 8 seconds or more to turn it off), but ICS is really so much better experience on tablet that I would really recommend it.

Finally a note about hardware performance: Nook Color has 512Mb of RAM and Ti OMAP 3621 @ 800 MHz which makes it probably a bit slow for ICS. As o consequence I wouldn't really recommend any Android laptops which are slower than this for ICS.

Update 2012-02-07: There is also CyanogenMod Kang build with OpenGL enabled which works very well. In fact, so well that it fixes problem in Hacker's keyboard :-)