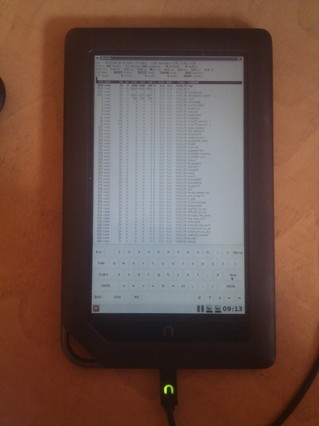 I have been toying around with idea of having real Linux stack (X11 and friends) on Nook Color. While this seems like a silly thing to do, it does allow me to use x2x and transfer keyboard and mouse from my laptop to tablet which is handy. If also allows me to run X11 applications on tablet screen using DISPLAY=nook.lan:0. I was fortunate enough to find blog post how to run Linux framebuffer X server on Android but I wanted to use touchscreen so I decided to write my own xorg.conf (this brings back memories...).

To get full-blown Debian-based distribution on your Android take a look at BotBrew Basil. It's Emdebian based distribution which will setup mount points and various other stuff so you don't have to do that manually. Since it's Debian based, you are not limited to Emdebian packages -- you can (and will have to) add normal sid:

If you want to know more about Emdebian hop over to DebConf 12: Integrating Emdebian into Debian [video].

With all this prepared, we are ready to shut down Android stack:

Next step is installation of required packages: I decided to use matchbox, mostly becuase it's only window manager which comes with on-screen keyboard which is useful on touch screen device.

After installation you will need to setup X symlink and create .xinitrc:

Finally, you need to create xorg.conf: This will map all hardware keys and use mutitouch driver for screen. To make it work, I used evtest package which allows you to see events from input devices so you will know which device produce keyboard events and which produce multitouch events. To be honest, this solution isn't prefect, because screen behaves like touchpad, so you can't just point to screen and expect your cursor to just to that position.

This is simple unaccelerated frame buffer. This makes performance less then desirable. There are a few implementations of OMAP xorg server:

Having accelerated OMAP X server and fixed touchscreen issues would make Nook somewhat nice Linux tablet, if only it isn't so heavy for day-to-day use :-)