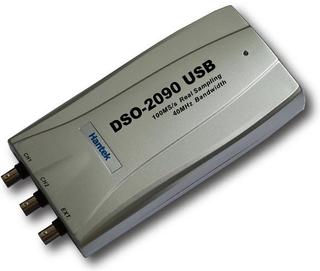 I have been using Hantek DSO-2090 USB oscilloscope for more than half a year now. While scope purist will say that usb oscilloscopes are not good enough for serious use for my use it's quite sufficient. However, this weekend, I was reverse engineering CPLD with R2R digital to analog converter, and I needed to figure out which steps are produced by turning pins on CPLD on or off. Sure, I can use multi-meter to do this, but if I already have oscilloscope it's much more powerful tool for task like this.

When choosing USB oscilloscope, I searched a lot, and decided to buy Hantek DSO-2090 because it's supported by free software like OpenHantek and sigrok. There are better oscilloscopes out there, but this one is supported by free software, and there is even a detailed tear-down which explains how to increase it's performance. When scope arrived, I was quite pleased with OpenHantek, but never managed to get sigrok working with it. It didn't matter at the time, since OpenHantek had everything I needed. However, for this task at hand I really needed minimum and maximum voltage. As you can see in video describing oscilloscope usage, and especially Hantek DSO-2090, including it's limits. 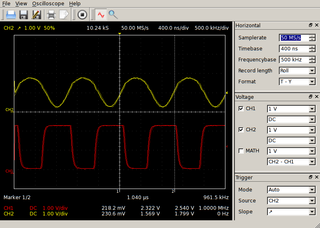 OpenHantek shows just amplitude of signal, which is difference between minimal and maximal voltage but doesn't show raw values which I needed. So, I wrote simple patch to OpenHantek to display minimum, amplitude and maximum voltage as you can see in picture. I also wrote a message on mailing list with a patch, so I hope you might expect to see this change in next version of OpenHantek.