I have been playing with Linux containers for a while, and finally I decided to take a plunge and migrate one of my servers from OpenVZ to lxc. It worked quite well for testing until I noticed lack of support for automatic startup or shutdown. lxc-users mailing list was helpful in providing useful hints and I found 5 OpenSUSE scripts but decided it's too complicated for task at hand.

I wanted single script, for easy deployment on any Debian box, with following features:

Result is lxc-watchdog.sh. It can start containers (and remember to start it on next host reboot), reboot or halt containers from host (using signals to trigger container's init) and automatically configure your container when you start it for the first time. Here is quick overview:

As you can see, I used file /var/lib/lxc/name/on_boot to record which machines to bring up. When container is started for the first time, it will have boot enabled (just in case this is production application which you will reboot in 6 months and then wonder why it doesn't work). You can change boot status using: Installation as init script /etc/init.d/lxc-watchdog is easy: And finally, it can also be used to manually start, halt or reboot containers: In fact, you can use halt or reboot if you don't like stop and restart, just to keep one mapping less in your brain when working with it.

Log files are created for each container in /tmp/name.log. They include lxc-start output with boot messages and any output that started scripts might create which is useful for debugging container installations. Output from watchdog monitoring /var/run/utmp in container is also included, and it reports number of tasks (processes) in container, and here is example of stopping container:

Hopefully this will make your switch to Linux Containers and recent kernels easier...
Continue reading

I know that title is mouthful. But, I occasionally use this blog as place to dump interesting configuration settings and it helps me remember configuration which helps me to remember it and might be useful to lone surfers who stumbles upon this page. 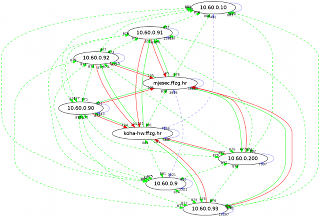 This weekend our nice network admin upgraded VLAN setup to enables 1Gb/s network across whole private segment. That is clearly visible in green arrows on picture, especially if you compare it with last one. We still have a few slower links (100 Mb/s) which pass through NAT to Internet (red arrows), but we now have private segment on every server in library and system room in main building and each server has IP address in new 1 Gb/s segment (you can notice that by blue arrows which are loopback interface on same machine).

All is not well, however. I had to reconfigure my OpenVZ containers from point-to-point ip configuration using venet devices to ethernet bridge setup because multiple hops on OpenVZ machine produced havoc with connections from our private network to containers. It was very wired, I saw TCP retransmission requests, but first packet somehow managed to pass through. ICMP traffic worked (thanks to small packet sizes), but I can't honestly say why our new VLAN setup and/or OpenVZ had problem with it. Up to that point, I just had private IP addresses assigned to OpenVZ container using vzctl set --ipadd 10.60.0.12 and ping -R did show multiple public and private addresses, but it all somehow worked.

First, I had to make network bridge which will be new VLAN 60

Then, I removed old private IP addresses: and add new veth device (my version of vzctl requires MAC addresses, so beware!): This create veth1 device inside container to which I can assign IP address: I decided to put that in /etc/rc.local because /etc/network/interfaces is managed by OpenVZ.

Next, I needed to reconfigure my ssh VPN which was using point-to-point tunneling with tap into real ethernet tunnel:

On remote side, force tunnel number and add new device to bridge:

It seems that I wasn't the first one to have idea of sharing MySQL installation between OpenVZ containers. However, simple hardlink didn't work for me:

So I tried something a little bit different: Which worked for me on old etch Debian kernel: I have wrong permissions, but socket is world-writable anyway... There is also related bug for kernels 2.6.24 and 2.6.26.
Continue reading

I'm working on Linux version of Sun storage machines, using commodity hardware, OpenVZ and Fuse-ZFS. I'm do have working system in my Sysadmin Cookbook so I might as well write a little bit of documentation about it.

My basic requirements are:

This makes it self-running system which won't fall over itself, so let's see how does it look:

There are several conventions here which are useful:

There are several things which I wouldn't be able to get without zfs:

Group by data in shell pipes

My mind is just too accustomed to RDBMS engines to accept that I can't have GROUP BY in my shell pipes. So I wrote one groupby.pl.


Aside from fact that it somewhat looks like perl golfing (which I'm somewhat proud of), let's see how does it look:


This will display total usage for process, it's name, number of such processes and range of memory usage. We can then use old friend sum.pl to produce console graph, but I already wrote about it.


So, let's move to another example, this time for OpenVZ. Let's see how much memory is each virtual machine using (and get number of processes for free):

But wouldn't it be nice to display hostnames instead of VEID numbers? We can, using --join and --on options (which are really backticks on steroids):

Which brings us to final result:

So, here you have it: SQL like query language for your shell pipes.
Continue reading

While those tools work well for me, they don't have much error checking, and most of parameters in them are actually hard-coded. Since, I am having presentation about virtualization on Linux on HrOUG this year, I will probably improve this tools a bit more.

However, I'm not quite sure if this tools would be of general use to somebody else. If it is, please drop me a note, and I would love to improve them a bit more...