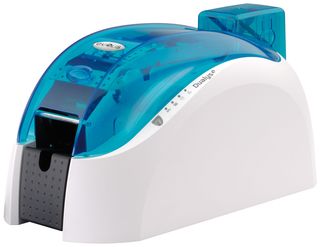 As you know by now, I'm working pure free software implementation of RFID support for our library. This time, I decided to tackle problem of printing RFID cards using EVOLIS Dualys printer.

This is experimental support for EVOLIS Dualys 3 printer with black ribbon (K) to provide pixel-exact driver with support for two-side printing.

Existing cups driver is available at

but I haven't been able to make it print on both sides of cards, partly because using duplex option in cups seems to segfault GhostScript and/or rastertoevolis cups filter depending on combination of duplex options.

I also needed pixel perfect transfer to printer, and cups bitmap format is always in color, leaving final pixel modifications down to cups filter which always produced differences between file sent to printer and perfect black and white rendition of it.

Following is simple walk-through from svg image in Inkscape to evolis command stream which can be executed in top-level directory of this distribution: