Allmost two years ago, I began my experiments with RFID, writing support for 3M 810 RFID Reader. Then I tried to make web interface for RFID it in Koha. 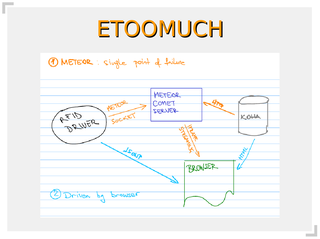 This woked, but having separate Comet server was too much complexity for me, so I decided to implement JSONP directly in RFID driver code. Hack, I allready had HTTP server, and local JavaScript interface, so why not?

But, two years of development and trying out different approaches produced not-quite-production-quality code. So, I began rewrite called Biblio::RFID. It splits RFID reader support from HTTP and JSONP servers and couples this with documentation and tests. I have production use for it this summer, involving programming of RFID cards as they are printed out, so expect it to change during next few weeks. After that I will push it to CPAN, but I would love to get feedback and comments before that.

Update: It's also availale at CPAN.