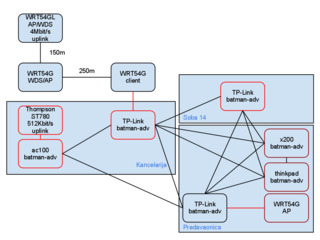 We had another gathering called Nothing will happen in Moravice, and this time we wanted to be prepared for it. So we got 2 WRT and 2 TP-Link devices with good faith that we will have stable Internet there. However, our telecom provider decided to screw up our order to increase bandwidth from 4Mbit/s to 10Mbit/s for event and instead decided to downgrade our access to 512Kbit/s. So we opted to create following simple network architecture which involved multiple hops to alternative 4Mbit/s upstream and batman-adv mesh setup.

batman-adv is quite cool layer-2 mash network which operates in ad-hoc mode and allows adaptive routing over mash and multiple upstream providers (at DHCP request or renew time, so we made our DHCP lease time down to 5 minutes). Joining network is quite simple:

This will bring any laptop with ad-hoc support (and not all of them have it), and relatively recent kernel (2.6.32 from Debian stable is a bit too old - batman-adv got included in 2.6.33 kernel) up and running on mash network.

My own experience with this experiment is very positive, mostly because we had around 5 clients in mash at any time, compared with overloaded WRTs which handled rest of 40 wifi enabled devices. But, I hope that during next event more people will upgrade to 2.6.33 or newer kernels, so we can have even better mash connectivity.