Liberate your Kindle 3 and get full-screen terminal! 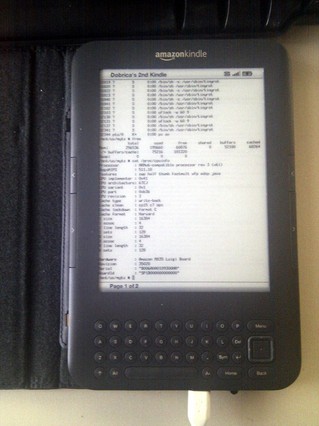 As you might know by now, I'm very happy user of Kindle 3 (keyboard) and Kindle DX graphite. One of reasons why I choose those devices was community around Kindle Developer's Corner at mobileread forum. With new generation of Amazon's Kindle device on the way, let me stress that for me older Kindle 3 devices are more interesting since we still don't have the way to run home-brew software on newer Kindle 4.

One of the good things about next generation of Kindles is that older models get sold second-hand at reasonable price, and let me re-iterate: for around 100€ older Kindle 3 with keyboard are great devices. But what would you do with one when you get your hands on? Start a k3libre project to develop and document free libre command-line tools for Kindle development. It's very much work in progress, with useful example scripts which describe framebuffer format, but also a handy step-by-step instruction on how to liberate your Kindle by installing jailbreak and usbnetwork to get root ssh access over usb cable. Next step is launchpad which listens on /dev/input/input? and allows you to bind execution of programs on key-presses. We are doing all this to install to nice full-screen Kindle terminal. You can do most of this work in under an hour, so there is no excuse not to read man pages on your Kindle!

So now that you can run your own software on Kindle, with which would you like to start? I would suggest kindlepdfviewer - a PDF viewer made for e-ink framebuffer devices, using muPDF. It's implemented in lua, so adding new features are rather easy, and latest development include serialization of state into SQLite database and drawing characters on screen! OK, it's in early stage of developments, but already useful on real Kindle, and if you don't like something you can always just edit lua code a bit :-)