I must confess that I'm pack rat. When I see old printer, something inside my head tries to figure out what I can do with all parts inside it instead of passing it to land-fill. However, I'm sysadmin and software guy, so JTAGs and programming is more up my wally than hardware. However, I decided to figure out how to drive one of servos using Arduino and this is my journey through this experience.

So I started with printer disassembly and got one stepper motor and some gears on it. It is Mitsumi M42SP-6TE. It has four wires and I couldn't find any data sheet about it. So what do I do now? 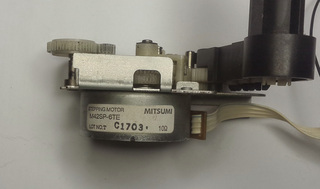 First some educated guesses.I assumed that it's 12V servo. This was somewhat influenced by examining similar Mitsumi MP42SP-6NK motor which have rating of 12V or 24V. Using unimer and taking ohm measurement between wires I confirmed that it has 10 Ω between coils which means it's bipolar, having two different coils which had both to be driven at the same time. 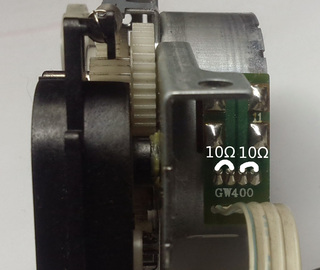 To connect it to Arduino, I acquired some time ago clone of Adafruit motor shield. When you buy cheap clones you expect some problems, and mine was fact that screw terminals on board weren't cut flash with board, so I had to use flat cutters and shorten them to prevent motor power from shorting with ICSP header on Arduino and USB connector on Uno. I also used red electrical tape and put it on USB connector just to be safe(r). 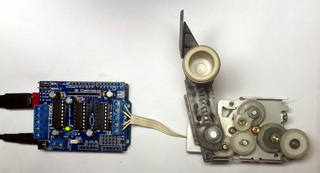 I also needed to add power jumper (white on picture) to provide power from Arduino (which in turn is powered by 12V 1A adapter). However, in this configuration L293D H-bridge becomes very hot to touch, so for testing I modified StepperTest example to provide me with serial control and powered Arduino from USB port (from which it draws 0.42 A and stepper still works with 5V supply which makes my 12 V assumption somewhat questionable). This enabled me to deduce that this stepper is also 7.5° which takes 48 steps to do full turn (small red dot on stepper gear helped to verify this). I also verified that top gear has 13:1 ratio to stepper motor making gear mechanism useful for smaller movements and better tork.

I hope this blog post will motive you to take old printers, scanners, faxes and similar devices apart and take useful parts out if it. Re-using boards for driving steppers is also very interesting, but this particular printer didn't come with power supply (and it has strange connector) and driver chip on it doesn't have any publicly available info, so this will have to wait some other printer which will decide to give up it's parts for my next project...